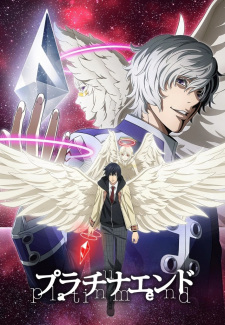 Plot Summary: Ever since he lost his family in an explosion, Mirai Kakehashi has lived a life of pain and despair. Every day, he endures abuse at the hands of relatives who took him in. As his anguish steadily chips away at his will to live, he is eventually pushed to the brink. Prepared to throw it all away, he stands on the edge of a precipice and takes the leap. However, instead of falling to his death, he enters a trance where he meets a winged being who claims to be his guardian angel. Named Nasse, the angel offers him two priceless abilities and convinces him to go on living. When Mirai experiences the marvel of his new powers firsthand, he gets a taste of the freedom that was locked away from him for so long. Armed with Nasse's gifts, Mirai is flung into a showdown with 12 other individuals, one of which will be chosen to become the next God. In stark contrast to when he wanted to end his life, Mirai is now prepared to do whatever it takes to protect his bleak chance at happiness, lest it be wrenched from his grasp forever.